News came in this week from the international tech media that a company in Kosovo, Gjirafa, received a foreign investment of two million dollars. That is a huge amount of money in a country with an average income of 430 euro a month, but, at the same time, a country with the highest internet usage in the entire Balkans.

“Our household internet penetration is higher than most other European countries, and we have one of the youngest populations of Europe”, explains Mergim Cahani, CEO of Gjirafa.

His company built a large platform with an Albanian search engine, travel information, job vacancies, weather news, and several other services. “But the majority of reasons why the internet is being used in this region is news, Facebook, Skype, Viber, and perhaps some entertainment. Is internet only for these five things? I don’t think so. Internet goes way beyond, but it is not being serviced to them. I think that is the right thing to do.”

Cahani does not only speak about the country of Kosovo, but also about millions of other people in the region that speak the same language, Albanian. Around thirty people are now working in the office in Pristina, which is the capital of the young Balkan state. “When I graduated in 2011 with an MBA, they asked me what my plans were for the future. At that moment, the Kosovo unemployment rate was 47 percent. I said: I’m going back and try to change that.”

It won’t be a surprise that Gjirafa.com goes further in exploring new ways to serve the Albanian speaking audience. “Last year, I went on holiday to the beautiful place of Saranda in Albania. But I was having troubles with finding a place to stay, until I got there. At Gjirafa, we want to digitalize all businesses in Albania, Kosovo and Macedonia. And then, if somebody needs information about a specific business, he should be able to find it. Whether he needs Chinese food, clothing, or a specific laptop.”

Another concrete idea is establishing some kind of ‘Albanian Amazon.com’. “We are analyzing the potential of e-commerce. I think the market needs it. We are doing some pilots, and I think it will be launched in the end of the year.”

Something else that seems to have a lot of potential in countries like Kosovo, Albania and Macedonia is online advertising. But, you cannot use the popular Google Ads service, because the tool around the ads does not support the Albanian language. So, Gjirafa came up with their own version. The Gjirafa AdNetwork connects advertisers and publishers of websites “We help our clients to do their online marketing more effectively and efficiently. We can target ads by the behavior of the internet user. So we can for example target people that are fans of sports, and they will only see relevant ads, based on their interests.”

Reading about the two million euro investment, one million users in the last ten weeks, and all the updates Gjirafa has been working on, this seems like a success story. 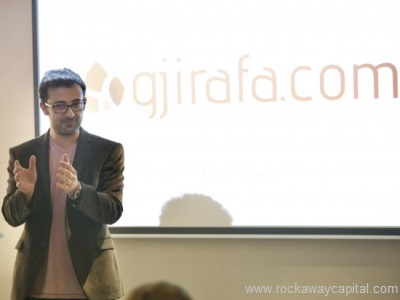 But still, not everyone is using the platform, and many people are skeptical or just don’t know about it. How does Mergim Cahani cope with that? “When I started with this, I had many people against me, some of those close. 90 to 95 percent of the people thought it was a stupid idea. When we launched Gjirafa.com three years ago, we had on the first day 150 users, the second day 70 users, then 10 users, and then it stopped.”

After that, Gjirafa gathered a bigger team, became a part of the incubator program of ICK, and received some funding.  This led to more creativity, inspiration and productivity. In 2015, the team won an important ICT award in Albania. “And then, more people started to believe in us, and things started to move. Currently, we have a solid fan base. But you still keep hearing some people saying ‘some persons just got lucky’. The thing is, you have those people, and you always will. What matters to us are our users, and to find a way to solve their problems.”

Cahani: “Recently I heard about a guy who was at night in Pristina and had to go back to another town, Prizren. He did not know when the last bus would leave, so he decided to walk to the bus station. But then he remembered our Gjirafa app, and checked the schedule. He found out that he had two more hours to stay in Pristina. This is a minor thing, but because of something small, like a digital bus schedule, he had two more hours to spend in the capital. That is what makes me happy.”

Did you like this? Here are other interesting articles: