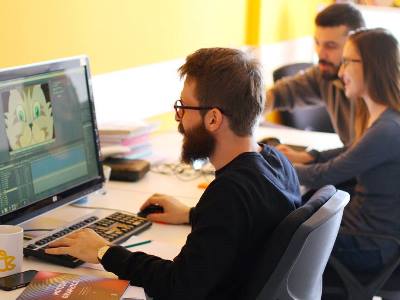 Kosovars make the visual content for a Dutch singer that performs this month in New York City. The complete visual branding of Sevdaliza, who is currently travelling for her international tour, is done by Kokrra, a design and motion graphics studio in Kosovo.

“During her concerts, a VJ projects our animations behind the singer”, says Kokrra founder Leart Zogjani.

“But we do all kind of design around her tour, so we made visuals for her website, social media, and promotion for her monthly radio show.” Pictures on social media become more and more motion-orientated. Instead of posting a static picture, artists use more and more moving images. “Therefore, we also make video loops for her Instagram.”

The young startup company Kokrra is based in Pristina, the capital of Kosovo, but their work did not go unnoticed abroad. The introduction video of Kokrra was published in a book, together with work of FOX, IBM, Nickelodeon, and Vodaphone.

Kokrra: a promising design and motion graphics studio from Kosovo

Zogjani (25), who did next to his Kosovar masters an American study and a semester in France, saw another project being showed abroad too. “For a Kosovar TEDx event, we made a video about famous historical women in the region. The international Ars Electronica Festival in Austria found out about this visual and exhibited it.”

Kokrra was founded in 2014, and is a part of the incubator program of the Innovation Centre Kosovo. It currently has five employees. Fun fact: before the start of the company, Zogjani was co-founder of another startup, Xiiik. It was the second most voted company in the Global Battle Startup.

Did you like this? Here are other interesting articles: