What is a Global entrepreneurship week (GEW) in Kosovo without the fresh minds of the youth? The day started with the theme of Youth, and kicking it off with some success stories; about start-ups that made it to successful businesses. A Business lunch was organized from CEED, together with the project Enhancing Youth Employment (EYE). Parts of this business lunch were a lot of businesses that started as startups and made it to stand were they are now.

As their message to the youth was to have big save ups: “save as much as you can, because you should 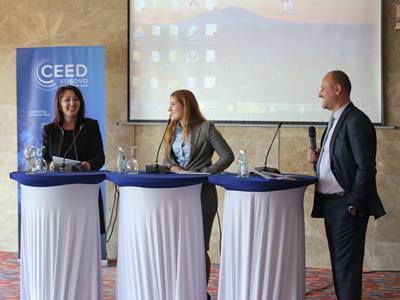 invest first, only you can bring your idea to life”.

Within the GEW, Kosovar Youth Council (KYC), created the event by following it up with two very critical debate themes with a good number of participants, coming from VET schools and other high schools of Kosovo. The debates came with the topics of: “Are VET schools producing entrepreneurial culture in Kosovo?” and “to what extent, education can stimulate the innovation of young entrepreneurs?”. These debate topics came along with different frustrations from the students, because as on their ideas they have emphasized that there is a need for a better education so they can fulfill the concept of an entrepreneur. What they are mostly concerned of is the curriculum of their education which, according to them, should be adapted to their concentrations in schools.

Youth from both Pristhtina and Mitrovica

As GEW touched not only Prishtina, but as well as other cities such as Mitrovica, IBCM as first time partners in this global event held the activity on Cooking up a business. Students had the chance to learn the basics of an entrepreneur, and as the result of some group works and small tests within the activity, they had the chance to think of an idea, and understand the privileges of being an 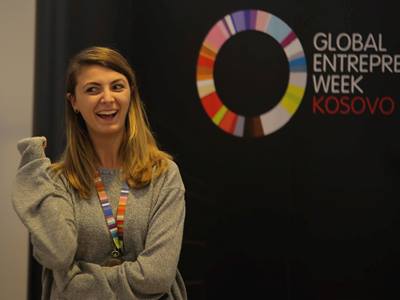 There was also a Presentation organized by the American Corner on the topic of: Maker space (in the making) as a platform for young entrepreneurs. There was a discussion on what a young entrepreneur needs to have, such as knowledge and skills and other tools to lead them succeed. What are the most challenges the young entrepreneurs face in Kosovo, and so many more facts that are self declared from the young start-ups that were present.

Ilir Deda
Trying to give the day a great ending, and for one moment to have a chance to laugh on our failures, and disappointments, there is a need for the last event of the day known as Fuckupnights, located in Prishtina. Where everyone had the chance to speak open about their failures, and show that there not the only once who have failure sorties behind them. Such failure stories had also our special guest of the night, Ilir Deda, who emphasized that no one became successful without having lots of failures left back. As he is saying that the youth should be motivated and should not stop just because they failed in something. You only think you have failed because you look back, but the point here is not to look back and even if you do so see those failures as lessons for you. An entrepreneur 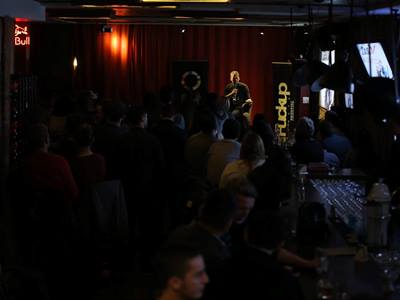 will make lots of failures because they are great risk takers, and falling should not stop them from reaching their goals.

Stay with us, the week is almost over so don’t miss the last events.