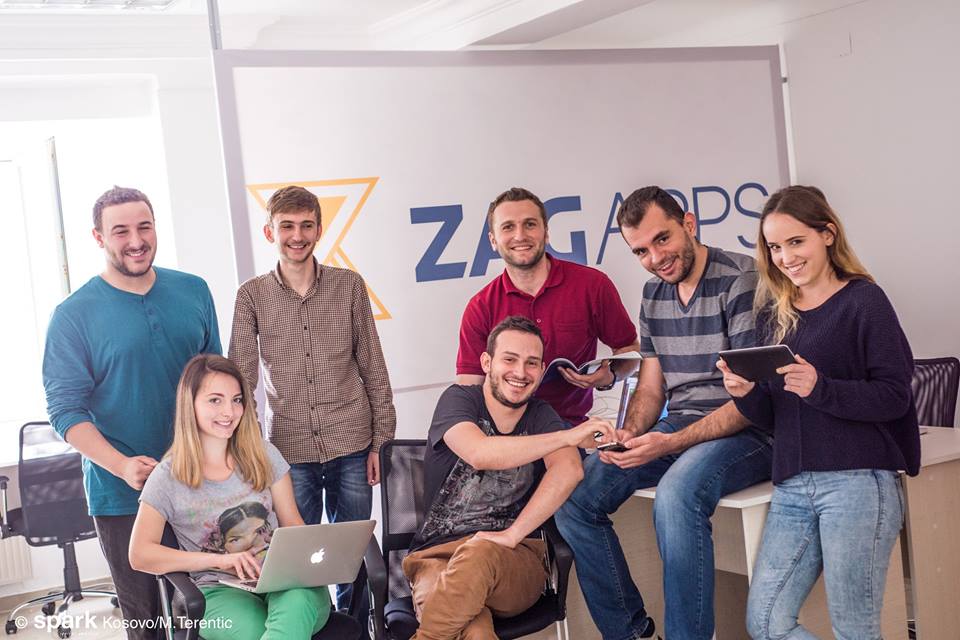 “So far, we have developed around thirty mobile apps. All of them were for foreign clients, ranging from US and Canadian enterprises and startups, to Dutch health organizations, universities and government.” Despite of his young age, Gentrit Gojani (25), the Managing Partner of ZAG Apps,

is already an experienced manager and entrepreneur.

“What we did for our clients in The Netherlands? For example, in collaboration with Sprigs, we built an app that tracks the generated solar power, we made one app for the health care sector, and a mobile-friendly survey app.”

Three youngster from Kosovo
Before ZAG Apps was founded in 2013, its three Kosovar owners had already won a couple of awards, in their own country. It all started with a Dutch entrepreneur and the American organization USAID, back in 2011. Gojani (in the picture with a red shirt): “USAID organized an Android development training in Kosovo, and selected ten participants. Among them, they selected me and my two friends.” These three were the youngsters Zell, Agon and Gentrit, which first names form the company name ZAG Apps. After the training, they joined the business incubator program at the Innovation Center Kosovo, before founding the company and moving to their own office.

“We are with nine developers working here now, and we are going to hire a couple more during 2016”, says Gentrit Gojani, about his office nearby downtown Pristina, the capital of Kosovo.

With Invenos, their spin-off product, ZAG Apps is selected as one of t

he finalists at the Pioneers of the Balkans contest. The Kosovar company is part of the last fifty, out of almost six hundred startups from the Balkans. The final pitch, in Croatia, was in front of more than one hundred investors. “We earned an offer from a business accelerator and an investor. We are working to close these two deals by the end of this month. Besides that, we started to work with two very promising startups from the USA. One of them is active in the transport industry, the other one in health care.”

Because of the relatively low operational costs in Kosovo, ZAG Apps offers very competitive priced services. But, Gojani does not feel like he is just a cheap alternative: “We deliver top quality and we take pride in providing value for our clients.”