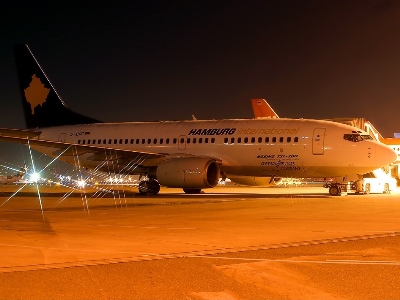 Kosova Airlines was established in 2003 by the Kosovo government and the United Nations. In that time, the U.N. controlled the Kosovo region.

The company leased an airplane till 2006. Fun fact: the tail of this plane was painted blue and yellow and looked therefore a lot like the flag of the Republic of Kosovo. That is interesting, because neither the flag, nor the Republic existed that time.

The company is proud of the collaboration it has with hundreds of agencies in the world and its good 24-hour-service.

The company says that they have developed with the support of partners Air Berlin and Germanwings. Other partners are Fly Albania, Germania, Pegasus and Edelweiss Air. You can book your flight to Pristina via FlyKSA.

Kosovo Airlines flies to the following destinations from Pristina, Kosovo. Please note: the schedule might change during summer season (Update: 2016).

Kosovo Airlines flies to the following destinations from Skopje, Macedonia, which is very close to Kosovo. (Schedule might change during summer season):